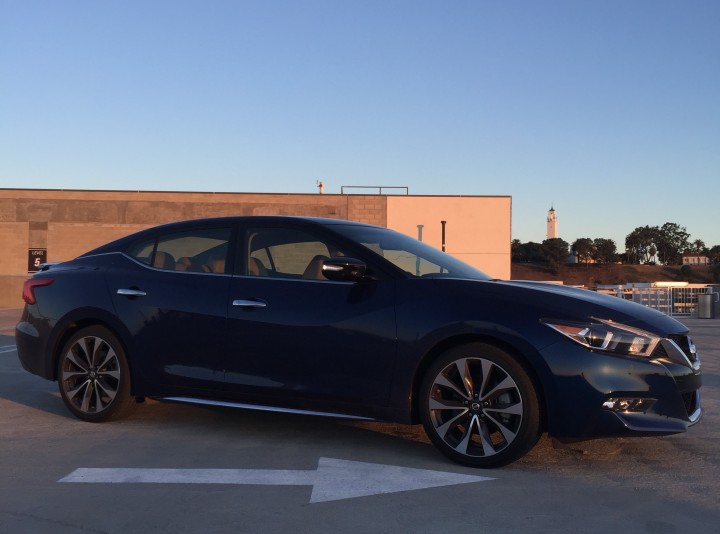 A few months back I was invited to the West Coast launch of the 2016 Nissan Maxima. I spent the day driving the Maxima in various trim levels, and left thinking that Nissan had a vastly improved car on their hands, but not a memorable one. At the end of the week I recently spent driving a Maxima SR ($37,670), I had a different opinion all together.

Walking up the the car I was once again surprised by how much better it looks in person than it does in photos. I think seeing a bunch of these together at the launch event lessened the impact of this, but parked among other contemporary vehicles, the Maxima SR stands out in the best way possible. The exterior design language only continued to grow on me and while photographing it in different locations and under various lighting conditions, I found myself being drawn to specific lines. On a number of occasions I caught myself doing so and had to laugh at myself for proclaiming the vehicle “a horrific mashup of all the current design trends” after seeing it for the first time in a Super Bowl commercial. 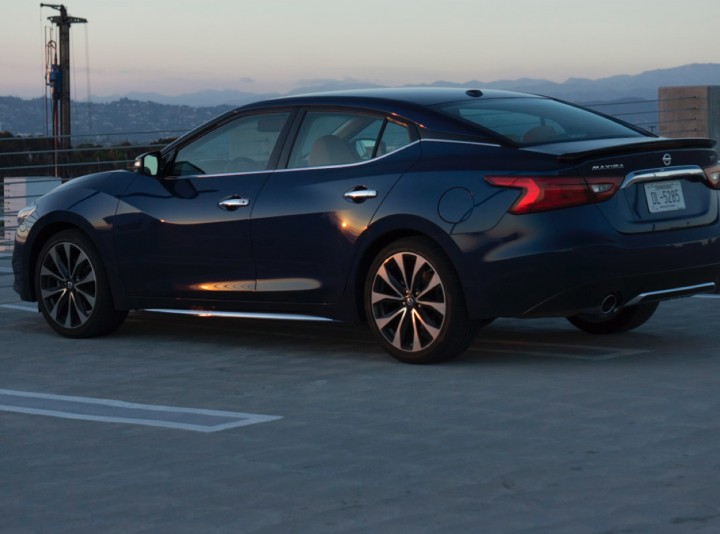 Sure, there are a number of stylistic elements present on the Maxima that can be found on its peers, but somehow the Maxima has managed to pull them off more gracefully than the competition. It certainly didn’t hurt that my tester was covered in beautiful Deep Blue Pearl paint and sported a Camel Leather/Alcantara interior. This combination gives the car a decidedly premium feel without going overboard and everyone I took for a ride in the car made some comment to that effect. Simply put, this new Maxima delivers on the promise every new car makes, to impress people by being visibly better than the last one.

From the diamond quilted Alcantara seating, to the soft touch materials spread around throughout the cabin, the Maxima is clearly a major leap forward for Nissan. If they were to apply this kind of styling to the cabin of the GT-R and the next “Z”, they’d silence a-whole-lot of haters in one foul swoop. It speaks volumes that the steering wheel in this mid-size family sedan puts that of their halo car to shame. In fact, the flat bottomed wheel would be right at home in many premium sports cars and dare I say a number of super cars as well. The perforated Camel Alcantara perfectly contrasts the black leather trim around the edge and compliments the two-tone appearance in the rest of the cabin. 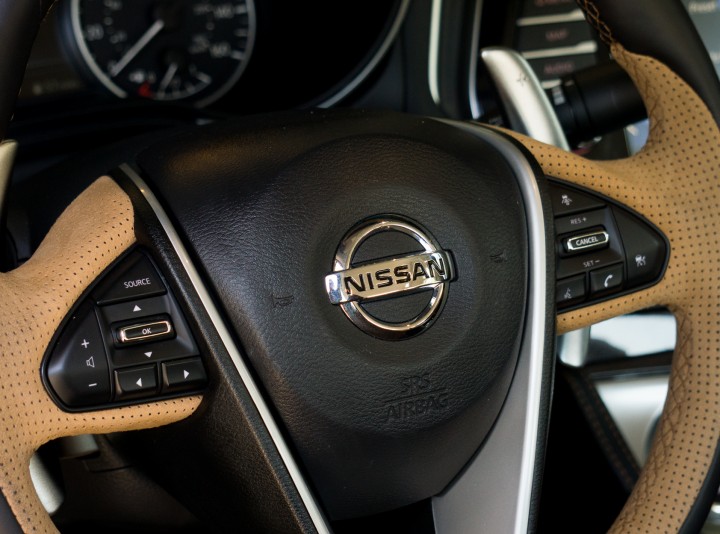 A great steering wheel goes a long way towards making for an enjoyable driving experience, but what it is connected to ultimately defines what feeling the driver walks away with. The SR trim level is the sportiest version of the Maxima and thankfully that means the inclusion of a whole lot more than superficial things like a spoiler, rear diffuser and rocker panel moldings. The SR has a proper sport tuned suspension which adds stiffer springs, retuned struts/shocks, and a larger front stabilizer bar. There’s also a Yamaha performance damper up front and monotube ZF Sachs dampers in the rear. That’s the hardware that is functioning all the time, the stuff that is built right into the SR. Push the now ubiquitous Sport button in the center console and you’ll have a more responsive throttle, more steering feel, and a more aggressive map for the CVT. It also pipes in more engine noise via ASE (Active Sound Enhancement), but I can forgive that trickery because the all the other stuff makes for shockingly fun driving experience.

All of the tech packed into the new Maxima works and it works really well. How do I know? Because I didn’t notice it doing exactly what Nissan says it will. I took the Maxima out for a day of spirited driving with my friends from the Audi Club Of Los Angeles. After they had finished fawning over the interior design and air conditioned seats, we headed up to some of the most aggressive roads in Southern California. I knew the Maxima had fresh brakes and the 19″ machined aluminum sport wheels wore fresh 245/40R19 performance all season tires, so I was confident that if ever there was a time to push the limits of a midsize sedan, this was it.

We stopped to take our first break after an hour of driving and I exited the Maxima with a big grin on my face. My friend who had been trailing me in his tuned A3 walked right up and said “I can’t believe how well that thing is handling, you’re keeping up with the front of the pack!”. The front of the pack consisted of brand new R8, RS7, S7, and two S5s. I had not lost sight of them through all the winding roads and in many places had to back off because I had caught them. When I tell you I was shocked by how composed the SR was on these twisty roads, I mean it, I really, really do. I’d go so far as to say that it even inspires a sense of confidence and urges you to push it harder the more you get used to it. That’s usually the kind of phrase reserved for true sports cars or at the very least luxury sport sedans that cost a whole lot more than the Maxima.

Did the Maxima keep up when we hit some very straight, very quiet roads out in the desert? No, of course not. The front of the pack crew ran away from me, but the SR managed to keep their taillights in view. With my foot to the floor, the run up to mid triple digit speeds happened easily and with surprising quickness. The CVT found exactly the right “gear” and allowed me to hold it as long as I wanted thanks to the oversize wheel mounted paddle shifters. Returning to a speed that won’t get you jail time is just as drama free as reaching one that will. That’s the sign of a truly solid car and one of the many things that I continued to marvel over as I cruised home. 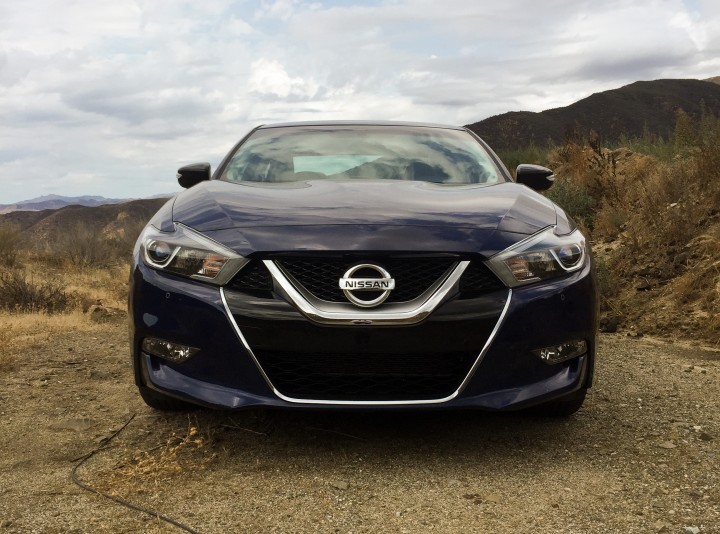 I think it is important to note that there are no bad cars anymore. We’ve reached a point where no matter what brand you go with, you’re getting so much more for your money than you were 10 or even 5 years ago. Nowhere is this more evident than in the midsize sedan segment, which is traditionally as fierce a battleground as there is in the automotive market. These vehicles need to be better than ever, because if they’re not doing a lot of things right, theres no reason for buyers to not get a crossover. The Maxima is the anti-crossover and a perfect example of why the midsize sedan still matters. There’s not a single comparably priced crossover that I’d feel comfortable driving the way I drove the Maxima. Not until you reach Audi SQ5 or Porsche Macan territory would you have something that offers the same kind experience. That’s indicative of just how much of a value the Maxima SR is, and it’s proof that a family oriented vehicle with sporting abilities, doesn’t have to carry a hefty price tag. 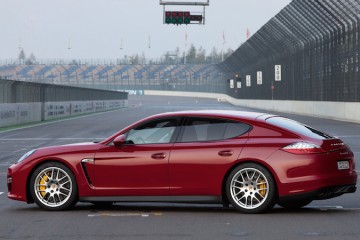