Does Mitsubishi Matter Without The Evo?
Andrew Maness July 28, 2015

When news broke that Mitsubishi was ceasing operations at its only U.S. factory in Normal, Illinois, it didn’t come as a surprise, but that didn’t make it any less of a bummer. Mitsubishi has been struggling to find a foothold in North America for a while now, and even though they’ve shown short term growth, the shutdown of the plant was really just a matter of time. It’s a shame to see this happen because lots of people are losing their jobs and it is a reminder of what Mitsubishi itself has lost: the Evo.

If you search “Mitsubishi Evo” on Google Images, the majority of the results will look nothing like the car above. They will mostly be highly modified cars with garish features and ridiculous paint jobs. For those reasons, and a number of other ones, I’ve never worshipped at the temple of Evo. I very easily could have been a member of the 4G63 cult, but my family history put me on the other side of the fence with the EJ22T crowd. A friendly rivalry between Subaru and Mitsubishi is present in both motorsports as well as the consumer market, and I’ve spent more time than I care to admit debating the merits of the Evo vs the STI. I’ve never walked away from any of those debates without learning something. Sometimes it would be about the cars themselves; sometimes it would be about the culture surrounding them. Either way, I always enjoyed the conversations and it was one of the things that made owning a niche market car so much fun. It was already unlikely that the Evo would return to our shores in the future and now it seems certain that it will not. If Mitsubishi isn’t making any of their cars in America, it certainly wouldn’t make sense for them to eventually bring back production of their halo car. That means no more great debates on the merits of helical limited-slip front and Torsen limited slip rear differentials vs open front and electronically controlled rear differentials. No more throwing shade at the immature street racing culture associated with the Evo and no more rebuttals that rightfully skewer the flat brim wearing, Monster Energy chugging Subaru crowd. Perhaps it just wasn’t meant to last forever and the debates are best left to the generations that were of driving age during the production run. Sure, drivers of the future that pick these cars up on the used market will get into it, but they won’t have the experience of the two brands trying to one up each other. I haven’t owned a Subaru for a few years now, but I still keep up with the community and without the Evo, the STI has no direct rival. Without that rivalry, I think it is quite possible the STI will not see the same type of improvements it would if the Evo was still around. I could be reaching but the motor is already long in the tooth and Subaru hasn’t made any indication that they plan to update it. There are cars that are similar in terms of performance and purpose, but none that were developed to compete with it directly. Now when people complain about the lack of Recaros available from the factory or the price point of the car, Subaru can simply say it’s cheaper than the closest competition which is now the Audi S3.

With the Evo gone, some Subaru fans will no doubt gloat and proclaim that the better car, and brand for that matter, won out in the end. As for myself, I’ll be carefully watching what Mitsubishi does in the coming months because it should be interesting. The Illinois plant is currently for sale and will close up for good if a buyer isn’t found. From where I’m sitting, it seems highly unlikely that will happen. Whether that means the end of all Mitsubishi cars in the U.S. remains to be seen. Given the global reach of the brand, I don’t think they’re going anywhere. What products they choose to sell us and how they do so will probably change. But change isn’t always a bad thing, it’s just hard to adjust to. Perhaps they’ll be so bold as to fold their shrinking network of dealerships and be the first major manufacturer to sell cars directly to consumers online. Regardless of what they do moving forward, the question remains: does Mitsubishi matter without the Evo? 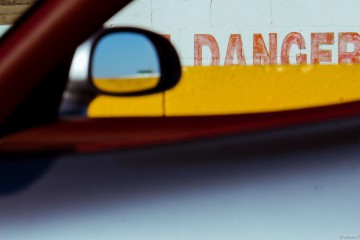