Sorted Is Now Live On YouTube – Here’s What It’s All About
Chris Teague November 18, 2020

The wait is over, because as of last week, Season One of Sorted hit the “airwaves” over on YouTube. The show follows Rob Ferretti, Matt Farah, Emilia Hartford, and Tanner Foust as they set out to find the fastest modified car in America.

I spoke with one of the Sorted’s hosts, Matt Farah, who joined filming with several years of experience filming his own YouTube content over at The Smoking Tire (also a podcast), as well as appearances in print at Road & Track and others.

To kick off the series, the crew showcased the eight cars that were selected from the East Coast entries. Fans could submit their cars online and the best handful for both the East and West Coasts were chosen to compete in the show. The goal is to put the cars through a series of tests to determine if they are truly better than cars that are stock-fresh from the factory.

That challenge created some interesting opportunities to source stand-in cars. Farah said that the crew had to scramble to get replacement vehicles in both the East and West Coast segments of the show. “In both cases, those cars came from shops because it’s the shops that have cars that are ready to be driven. So, it’s an interesting dichotomy between what you want, what is available, and what becomes unavailable.”

Matt notes, and many of you will agree, that the kind of people that fiddle with cars just don’t stop. “It’s very challenging,” he said, mentioning a common scenario he’s encountered over the years, where “someone will put the car into something like max-kill mode to try and get your reaction and the car eats itself along the way.”

As far as the tests and the cars themselves, Farah’s quick to note that we’re in a golden age of factory-built tuner cars. It’s easy to make a car at home now with astronomical power, but as he says “we’ve proven twice now that very easily, without any proprietary work whatsoever, that factory-built tuner cars are better in every single way than the homebuilt tuner cars.” The lesson is, he says, that “if you want a tuner car and you actually want to drive it hard in tough conditions, you’re not going to be better than a factory with hundreds of millions of dollars in backing.”

Sorted is a great way to see Farah and the others in action, but it’s far from the only thing he’s got cooking. West Side Collector Car Storage is Matt’s “other” business, and is one that took him years of planning and effort to pull off, not to mention the difficulties of opening and training staff in the middle of a pandemic. Farah says he’s happy with how things have been going since the facility opened almost two months ago, and notes that it’s already well over halfway full with vehicles of all sorts occupying his storage racks. One thing working in his favor with WCCS, Farah says, is that driving is one of the few things that people can safely do during a quarantine period.

You can watch episode two of Sorted on YouTube now, so head on over and check it out. What do you think? Would your car make the cut? 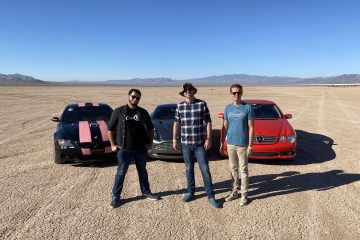